Three extraterrestrial aliens, Ti, Tu and Ta, are sent to Earth to find out the source of space trash that has been affecting their home-world. There they discover a planet in the middle of an environmental crisis caused by a species that’s also polluting its own world. Our heroes have orders to observe, understand and intervene to try and stop this act of nonsensical madness. However, they understand little about these strange, creative and self-destructive creatures called humans. But they’re not going to let that get in the way of their mission.

THE DORIANS NEED AN ANSWER ..
TO SOLVE THE “ EARTH SITUATION ”

TiTuTa is a show that will help kids explore, through the medium of
action/sci-fi fantasy the very hot-button subject of
the Earth’s current environmental crisis.
We will hopefully demonstrate these ideas through a fun and playful fictional
lens. It will allow them to see what human behaviours are not helping and
what changes in our behaviours might bring about positive changes in future.

Episodes will be one of these types on its own or a combination of two or more of these elements:

When Earth’s space junk started disappearing from our radars, little did we humans know that it was disappearing into a ‘Gravity Well’ and re-appearing in the space territory of a technologically advanced species of extraterrestrial Aliens called Dorians. The Dorians as a species are far advanced from humans in so many ways and yet comparatively quite naive in others. When some of this space junk started to cause chaos for the Dorians who lived there, Dorian High Command decided to send a team of adventurers to discover who could possibly be behind turning their well-managed and highly evolved environment into a space junkyard.

What the Dorians found, blew their tiny, but highly intelligent little minds… They discovered Earth…  A place of great and varied biological diversity, well beyond what they have in their own. And that this amazing place was populated by the craziest and unimaginable creatures and things.

The Dorians were immediately fascinated by these strange and compelling humans: One that has the talents to create all sorts of interesting technologies and do astonishing things. But they frequently do so at the expense of their planet that they need to survive. Also, frequently at the expense lot of the innocent creatures they share the Earth with. Now, what kind of insane, self-destructive behaviour is that?

Our team of heroes can sometimes be sent on missions to find certain objects and devices that the Dorian High Command deems of significance to their overall mission of learning about Earth and helping with both planets looming environmental crises. 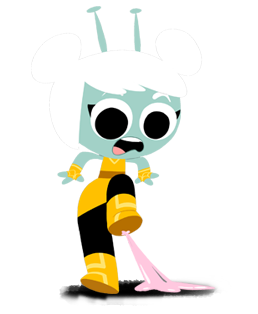 The team’s leader and beating heart of the operation, Ti is a Dorian Princess, sent to Earth to do missions on behalf of the Dorian leadership, whom she doesn’t always see eye to eye with. She’s heroic, brave and with a strong sense of right and wrong. She can’t walk away from a situation where someone or something needs help, even if it’s not part of their orders. She’s also something of a rebel who loves nothing more than a bit of danger and excitement. Ti also has something of a temper, and while she’s slow to lose it, when she eventually does, stand back and watch the fireworks. They’re guaranteed to be spectacular… 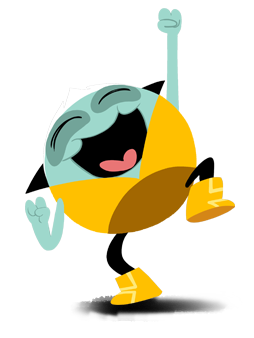 The baby of the group,  Tu is an enthusiastic but naive bundle of energy. He’s extraordinarily creative and instinctual and he loves creating and experimenting with both Dorian and Human technology, finding amazing new and creative uses for both. He also loves making and fixing things. His curiosity is boundless. Tu wants to make friends with everyone and everything.
His creative problem solving, and ingenuity make him an amazing asset to the team.
Tu has become addicted to Earth TV since his arrival to our solar system and is constantly inspired by what he watches on it. But he’s not always able to tell the difference between what is real and what is fiction. 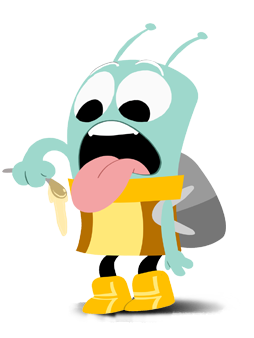 Ta is the group’s strategic thinker. He’s cautious by nature and naturally the most intellectually gifted of the trio, but sometimes gets bogged down in overthinking things. He’s also something of an introvert, preferring to stay back and watch when he can, instead of getting his hands dirty.
Ta is also quite obedient and conservative and doesn’t like having too much responsibility. Ta wishes he was braver than he is and when the chips are down, he’ll never shy away from what needs to be done. Ta considers himself something of a scientist of Earthling behaviour.

Our Heroes identify the source of the space trash . It’s a giant space rocket filled with junk that is to be launched into space later that evening. High Command orders them to infiltrate the Junkyard and sabotage the rocket before it takes off. All that stands between them and success is a very grumpy cat.

TTT encounter another  junk disposal scheme involving a giant catapult that can fling trash into orbit (and beyond). When High Command learns of this new threat, the Heroes are sent to sabotage the machine before too much trash is launched into orbit.

When our Heroes spot the melting ice caps from their satellite feed, they decide to investigate it themselves. There they come across a stranded baby polar bear on an isolated and shrinking mini iceberg that’s floating south to warmer waters. The team must work together to pull the creature back to the main ice sheet without getting eaten by the bear or the creatures in the water below so they can reconcile it with its distressed mother.

When it comes to the attention of High Command that the Humans are cutting down an ancient forest, they send our heroes to investigate. They soon discover a pair of lumberjacks are in the middle of cutting down the biggest oldest tree. How will the tiny aliens convince the two destructive humans to leave the forest and never return?

When our heroes are sent to Antartica to investigate a melting ice shelf that could soon fall into the Ocean, they are accidentally discovered at a military base by an army of flying drones. The captain who is hostile to any alien-based lifeforms, unleashes his army on the unsuspecting heroes. How will they figure out to beat the drones without while trying to stopping an environmental catastrophe?​

An obsessive UFOlogist , discovers the Dorians are real.Hhe decides to create a trap to lure them to Earth for an ambush. When our Heroes arrive to intervene in a staged environmental disaster, he manages to capture the baby of the group, Tu. Annoyed and angry at being tricked, Ti and Ta mount a rescue before the UFOlogist  can broadcast news of his ‘discovery’ to the rest of the world.​